The European première of the 66 Flybridge and the worldwide debut of the 377 Coupé will be the stars of this year’s participation of Astondoa at the Cannes Yachting Festival, to be held from 11 to 16 September.

The 66 Flybridge will be one of the yachts that will set sail for Cannes. A model in the range of cabin cruisers, ranging from 44 to 80 feet, that surprises by its exceptional habitability, comfort, and high level of customization as well as by its remarkable design, which results in spacious interiors typical of larger ships.

With 20,13 m in length and 5.3 m in beam, the 66 Flybridge is distinguished by its unmistakable and unique lines, especially those of the flybridge, which stand out as much as the side windows, perfect for enjoying maximum views of the sea. The sideways are designed with a single step at the end of the first third, another feature of this model which allows the configuration of a flybridge with a maximum beam solarium. The modern, aerodynamically designed hard top is striking. The spacious aft area, with access to the side corridors without steps, adds, on the main deck, to a saloon, dining area, kitchen, and navigation area at the same level, without steps. On the lower deck, we find the Master suite cabin at the maximum beam with a total surface area of 18 m2, and ensuite bathroom. Two double cabins with a full bathroom and, in the bow triangle, the fourth cabin with a central double bed.Endless possibilities of customization and maximum quality in all its materials and finishes complete the Astondoa signature of this boat.Worldwide debut of the 377 Coupé

The second model in the Coupé range, which represents the evolution of the shipyard towards a more modern, sporty, original, and bold aesthetics, will arrive to the Cannes Yachting Festival in September. The 377 Coupé, like its predecessor the 655 Coupé, is designed for those who love sports cruising and are looking for a more daring experience on board. This new model, of smaller length, is part of the “Dayboat” segment and its tender version is undoubtedly attractive, with highly sporty and very elegant lines that inherit the luxurious qualities of Astondoa, adapted to the new trends and tastes of today’s customers.With 11.50 m in length and an inverted bow, characteristic of the Coupé series, the 377’s stern and its unique space that reflect the collaboration of the shipyard with well-known designers from the automotive and supercar sector for this Coupé series cannot go unnoticed.Its rooftop has a walk-around in its entire perimeter; at the same level, it has three different areas: two solariums, at the bow and stern, and a third half-length area, which connects the kitchen and fridge space with the triple set of sports seats located in front of a modern console, with harmonious and modern instruments and multifunction touch screens. Inside we find the lounge/cabin with its refrigerator and audio/TV system, completed with a spacious bathroom, exceptional for its length, and a second cabin for two people. 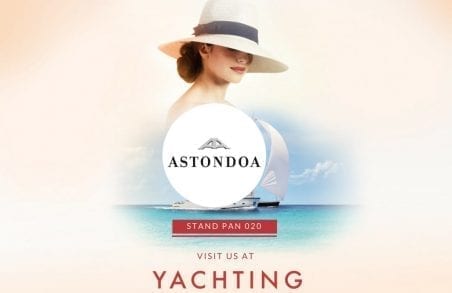 ASTONDOA IS GETTING READY FOR CANNES YACHTING FESTIVAL 2018